top of page
This site was designed with the
.com
website builder. Create your website today.Start Now

Next week will be the third anniversary of the first generation of VR headsets produced by HTC and Oculus. In the interim, we've witnessed the growing pains of VR - the slow rate of consumer adoption, the continued paucity of great content, and the departure of some of the early players including CCP games - the developer of Eve Valkyrie. On paper, the last three years might look like a boom and bust, but if you're a VR enthusiast, there is hope on the horizon!

A few companies - like Virtuix, were early to recognise this faltering start and pivot to a commercial use of their product, and VR has been doing well at VR arcades and other LBE (location based entertainment) venues. I was at IAAPA in Florida this past November when Virtuix unveiled their new "VR Arena" attraction, which is a sight to behold.

Appointments were fully booked - VR Arena was the hit of the show at IAAPA 2018!

It's a bit like stepping into an alien spaceship - your pulse is racing before the game even starts!

VR Arena is the epitome of esports - a highly automated, twitch-streaming monster that supports four players and seating for eight. While one group is getting prepped, the other battles for a chance to win the monthly prize of $2000. I competed myself - not in the cash event, but I did win a t-shirt for getting the top score that day, and it was a blast!

Added to my t-shirt collection!

Virtuix is now a seasoned veteran of the VR industry, and they've harnessed all the lessons they've learned and poured their knowledge into VR Arena. The focus of the attraction is not so much the VR, but the fun of the whole experience for the user - which includes being sent a video of them playing the game which they can then share on social media, much like the Stratosphere hotel's "SkyJump" in Las Vegas.

Virtuix's VR Arena is the product of years of experience, placing less emphasis on the VR aspect, with more focus on ease of use and the customer experience as a whole.

Esports has been a buzz word for a while now. You may know that it attracts millions of viewers and has turned some gamers into wealthy celebrities, but there has so far been a divide between those who participate in and follow esports, and those who don't. What's special about VR Arena is that it makes esports accessible to anyone. You don't need to be a PC whizz kid, or have a lot of money, free time, and professional coaching to become a world champion contender or celebrity, and the experiences range from casual to hardcore. Anyone wandering through an FEC with their friends or family could stumble across this glowing green beast, and that could be the beginning of their journey to fame and fortune.

So how might VR's success at LBE venues benefit home users? Consumer VR is said to be missing its "killer app", which is not likely to be a single application like Pong or Wii Sports, but a genre. While one title may come to represent that killer category, I now believe that the breakthrough content for VR will be fitness. It's not so wild a theory when you consider that the award winning Beat Saber has been consistently outselling Bethesda's Skyrim VR and Fallout 4 VR - games that many of us believed would propel VR into the mainstream. Beat Saber is reported to have sold over a million copies and will be a launch title for Oculus' mobile VR headset, "Quest", which is expected to release this spring - https://uploadvr.com/beat-saber-oculus-quest-launch/.

Beat Saber is coming to Oculus Quest. Will it help speed up VR adoption in the home?

How could a rhythm/fitness game outperform two of the most popular video game franchises? You can break it down into five key attributes - simplicity, fun, competition, audio-visuals, and physicality. It's pure sport, something that strikes a chord with the broadest number of people. I did not always think accessible esports would be the killer app for VR. In 2012, I wanted simulations of life (think Shenmue, not Wii Tennis) - but I've learned that when you're trying to tempt someone out of their comfort zone, you don't do it with something complex and intimidating, you use something simple, familiar, and clearly beneficial. As someone who had always been slim, it was only when I started to put on weight that I came to appreciate how appealing the idea of VR fitness applications could be - like many people I find traditional exercise boring, but sport and games are fun!

Virtuix's Omniverse platform has many great "Active VR" games, including Training Ops, Core Defense, Hardpoint, VRZ: Torment, and most recently Bull Runner. Competition is a great motivator, even when it's against an AI. Thanks to these games, and others I've found on Steam, I've been gradually getting back into shape.

Training Ops (available on Omniverse) will test your fitness if you want to top the leaderboard.

Creed Rise to Glory puts you in a Rocky movie and all you need to do is throw punches!

In Biathlon Battle VR the skiing is just a matter of leaning and pushing the controllers down as if you were really on the slopes.

Fruit Ninja VR is as uncomplicated as swinging a Katana.

BOXVR - a similar style of game to Beat Saber. Just punch to the beat of the music.

VR Ping Pong Paradise uses the trigger to pick up the ball when serving. Otherwise, it's as simple as the real thing.

VR Athletics lets you experience competitive track and field events in front of a huge crowd.

Run and gun in a multiplayer game of Core Defense (available on Omniverse).

These games are more intuitive than most gym equipment, but a lot more fun!

Between the growing popularity of Virtuix's esports contests, and the coming of the second generation of VR headsets such as the Oculus Quest and the rumoured "Rift S", the future of VR is looking a lot more promising. 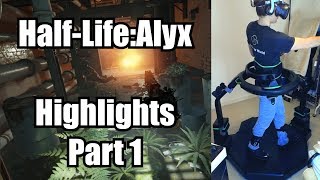 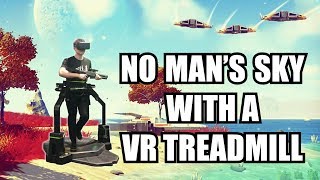 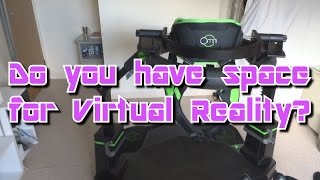